The public art project Flatbread Society in Norway is taking on a canoe a mobile oven along river and sea across Norway to unite people around making and baking bread!

The tandoor oven installed at R.V.Burgess Park in Toronto. Find out more about this inspiring initiative here.

In 2016 in Sheffield, England, Friends of Sheaf Valley Park put efforts to revive a great community tradition of community ovens and baking, and reinstate the Shrewsbury Road parish oven. It included hand making a traditional cob oven; organising a series of real bread making classes; and opening up the oven on a regular basis for community bread baking sessions. 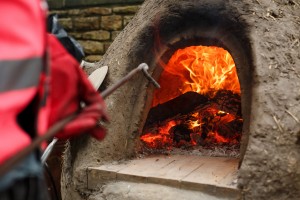 The organizers say “The oven will be lit at least once per month from June to September so that local people can bring dough they have made at home to be baked in the communal oven. Ultimately we hope that the shared skills developed through this project will lead to other cob ovens being built in several locations in our area so that on any weekend there might be at least one community oven being fired up where people could come together to bake in a wood-fired oven.”

Find out more about this exciting project here.