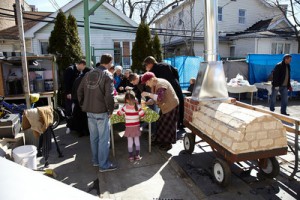 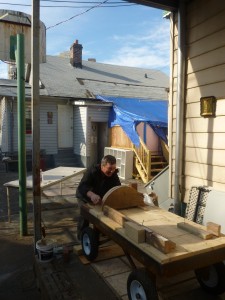 Hearing about our popular Harlem Bake events, a homeless shelter, part of a Russian Orthodox Church in the low-income Brighton Beach area of New York, got inspired to build their own oven. The priest, Father Vadim, imagined building a wood-fired oven on wheels in order to take it out to the streets where the homeless gather and to try to inspire them to bake with other locals and, hopefully, to help break their skepticism, touch their hearts to open up, and help them change their lives. But how to build the oven, and with no money on hand? An angel showed up: an immigrant from Ukraine who turned out to have built the ovens of one of the biggest monasteries there, Pochaev! He volunteered his labor, invented the design, and in just a few days in January the oven was ready, and, indeed, it proved to open up the hearts of the homeless. On a freezing January morning, 2012, one homeless Muslim man, in particular, had tears in his eyes when he shared how the fire in the warm hearth in the freezing cold reminded him of his far-away homeland and it gave him new hope to go on!